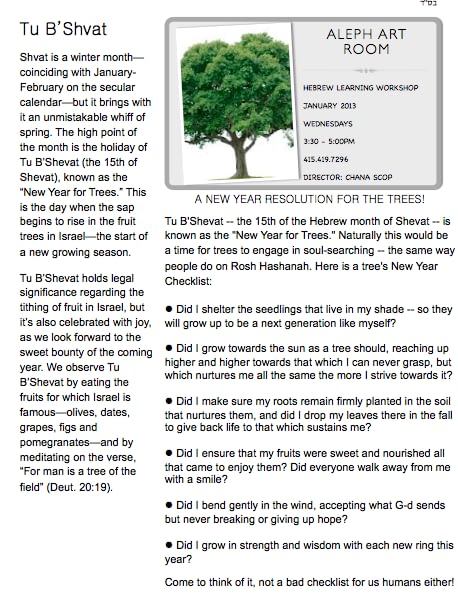 Here is a Tu B’Shvat handout to give to parents.

I give credit to chabad.org for content and to Jay Litvin (a”h) for his beautiful and touching article.

It is one of my most favorite articles and is very inspiring.

Here are two documents, the parent handout in both PDF and Word , although the Word Doc. will not come out as the pdf but you can at least change it to your needs.

HOW A STUPID LITTLE RULER SAVED MY LIFE!

What does it mean to be indispensable?

For most of my life Iâ€™ve asked myself that question. Maybe not in those words exactly. But Iâ€™ve always had this feeling that there was some purpose to my life uniquely destined for me and me alone.

I can remember, as a young man in my early twenties, sitting under a tree, my back propped against the trunk, gazing out at a forest. I was in Woodstock, New York, during what some call the â€œWoodstock years.â€ Days of pondering life and destiny. Of feeling free and unfettered. Of infinite possibilities.

I was young, single and without children. Money was inconsequential. Either it was easy to acquire or it didnâ€™t matter much.

I wasnâ€™t a religious person then. Not in any formal way, anyway. But, I was a spiritual being. Even in childhood, I was a closet believer in a secular household. But still, compared to now, I canâ€™t say that I was religious, though I was definitely interested in communing with a universe that transcended my puny little self.

And in that moment, the creature of Gâ€‘dâ€™s creation that offered itself for my contemplation was this tree under which I was sitting, the one whose trunk now supported my back. So I sat there thinking about this tree, and I began to envy it. I envied its lack of confusion. I envied it for not having an identity crisis.

This tree seemed to know exactly what it was about. And its purpose seemed not only clear, but also beneficial to the world around it, including me, the one whose back was being supported by its trunk, whose head was being shaded by its leaves, and whose body was enjoying the cool black earth and green grass that had been sheltered from the blistering sun by its leafy canopy.

And so I did what any young man in my position would do: I began a conversation with Gâ€‘d. I was not a stranger to these conversations. I didn’t have them on a daily basis like I do now, but I had them regularly, and they were always quite moving and profound.

And in my conversation I did what I often do when I talk to Gâ€‘d: I complained. I asked Him why He would give this tree a life of purpose and leave me in the dark. I requested that I be given as much clarity as this tree about the purpose of my life. I told Gâ€‘d that just like I was sitting here appreciating this tree, I too wanted to be appreciated, and I wanted that appreciation expressed to me in clear, simple terms.

I think (if I remember correctly) that most of all I just wanted to know why Gâ€‘d put me here, so that I could get on with doing whatever I was supposed to be doing to fulfill my purpose in life.

There was no revelation that day. At some point I tired of my dialogue, stood up, brushed off my pants, and continued on my confused way.

Years went by. Lots of searching and seeking and, yes, more dialogues with the One Above.

Within these years I came close toÂ Torah, discovered the teachings of the chassidic masters, and certainly felt closer to having discovered my purpose than ever before. But, to tell you the truth, I still didnâ€™t have that kind of crystal-clear clarity of purpose that I had hoped for that day under the tree.

I looked at my son, took a deep breath, and knew that I was not going to make my train

Actually, it wasnâ€™t until one day, during the months I was undergoing chemotherapy, that I had the moment of clarity I was looking for. And believe me, during those chemo months I wanted this clarity just about as much as Iâ€™ve ever wanted anything in my life. It was vitally important, during those days of weakness and fear, to reach some understanding of what my purpose was on this earth, what I was sent here to accomplish, the turf of my indispensability.

First, let me tell you that Iâ€™m now nearly fifty-eight years old. I have a bunch of kids. And money is neither easy to come by nor inconsequential. Life has changed a lot since those under-the-tree-at-Woodstock days. And I love every inch of every change.

Among my seven children is my little eight-year-old Dovie. Heâ€™s the youngest. My oldest boy just got married.

The other morning, little Dovie was having a crisis. He couldnâ€™t find a little ruler he uses to do his geometry. He was searching all over the house for it; he was late for school; he was crying because he was having a test that day, and if he didnâ€™t bring this little ruler, not only would he fail the test, he wouldnâ€™t be able to even take it. He was facing what in his life would be considerable embarrassment and humiliation.

I was about to leave for an appointment, and was running late because of spending all this time helping Dovie look for his little ruler. But he was frantic and I just couldnâ€™t leave him.

When finally, in defeat and tears, we decided that the ruler was a lost cause, I looked down at his sad little face and decided to drive him to school. He wouldnâ€™t have his ruler, but at least he wouldnâ€™t be so late. Hopefully, I had enough time to drive him and still catch the train and get to my appointment.

We scurried down the stairs together, him still sniffling about what was going to happen at school, me rushing and hoping I wouldnâ€™t miss my train, but mainly feeling really bad for my sad little boy.

We quickly got into the car, buckled our seatbelts, andâ€”just as I was about to reverse the car from the parking spaceâ€”I stopped. I had this moment. I looked at my son, took a deep breath, and knew then and there that I was not going to make my train. I wasnâ€™t even going to try to make my train. Instead I was going to drive straight to the closest store and buy him the little ruler he needed. And then I was going to take him to school, park the car, go inside, and talk to his teacher so he wouldnâ€™t get in trouble for being late.

It was a crystal-clear moment. And once the decision was made, I carried through these actions without doubt nor hesitation.

When I told my son of my decision, he smiled, squinted his little eyes in a sort of botched attempt at a wink, sat a bit straighter in his seat, and looked out the window at a world that had just gotten quite a bit brighter.

However, shortly after buying the ruler, talking to the principal, leaving my son, and calling on my cell phone to postpone my appointment, doubts began to attack my certainty. Driving back home, I began to berate myself for my choice. How could I blow off an appointment just to buy my kid this stupid ruler he needed for his stupid weekly math test?

By the time I pulled back into the parking lot in front of my house, I was in turmoil, and just sat there for a while. And suddenly, from out of nowhere, I began to smile. And then my smile turned into a laugh. And then my laugh became a glow that emanated from my heart up to my head.

Do you see, Gâ€‘d, how much my children need me?

I realized that I was, in fact, quite proud of myself for the choice I had made.

And I did in this moment what any father in my position would do: I began a conversation with Gâ€‘d.

And I asked Him: Who needed me more at that moment? To whom was my presence and attention the most crucial? Who else wouldâ€™ve gone and bought my son that ruler? Who would have even cared?

Do you see, Gâ€‘d, how much my children need me? And how they will need me for many years to come?

Can you see, dear Gâ€‘d, that I am the only Dad my children have, and that this is, without a doubt, the one area of my life where I am clearly and with certainty irreplaceable and indispensable?

And as I continued this conversation, attempting to convince Gâ€‘d of my absolute indispensability, requesting that in the merit of this indispensability He cure my disease, I had the feeling that this stupid little ruler was keeping me alive.

From that day forward, a new awareness and a new prayer entered my life. I began to notice dozens of indispensable moments every day. And as I became aware of these moments, I would attach to them the same prayer: Please, Gâ€‘d, canâ€™t you see how much my children need me? How important it is to keep me alive? Heal me.

This prayer would emerge whenever my children and I would share a smile or a goodbye kiss; when we sat and talked together about their life or problems at school; when I would tuck them in bed or cuddle with my boys under myÂ tallitduringÂ birkat kohanim; when we would sing at theÂ ShabbatÂ table or lightChanukahÂ candles; or when I would go to their school and talk to the principal.

These were moments that had occurred hundreds of times beforeâ€”lots of them containing inconsequential things like lost little rulers and misplaced bobby pins, bruised feelings, moments of disappointment, a math problem solved. Only now they were crucial moments, each accompanied by prayer. Now they were escorted by an awareness of the absolute decisive role they were playing in my childrenâ€™s lives and in mine. They were moments, I believed, that were keeping me alive.

In these prayers, though short and silent and barely discernible, I desperately try to convince Gâ€‘d of my indispensability. Like a lawyer I plead my case, beseeching the Almighty with the full intensity of my love for my children that in His mercy he allow me to fulfill my purpose for many, many more years.

For, you see, I have become like a tree. And just as that tree once supported my back as I leaned against it, so do I now support my children as they lean against me. Just as the leaves shaded me from the bright, blistering sun, so do I provide protection and comfort to them in the midst of a world that sometimes threatens to burn their sensitive skins. And just as the treeâ€™s canopy allowed the earth to retain sufficient moisture to nurture the green grass beneath it, so do I nurture my children with the physical, emotional, and spiritual food they need for proper growth.

My Woodstock prayer has been fulfilled.

All Posts »
PrevPreviousJust Smile!
NextPurim by the Sea (Part 1)Next